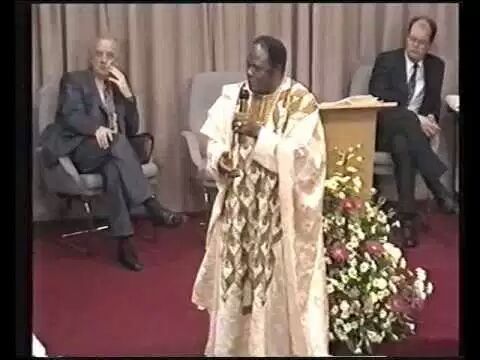 Elder Ogolo began conducting the service, leading the songs and calling on another of the elders to lead in prayer.

After the prayer, and before Elder Ogolo had time to resume his position behind the pulpit, Archbishop Benson Idahosa quickly walked up on the makeshift platform. “I am preaching to you today from John 3:16,”he announced to the people, “a sermon on the love of God. “

The worshippers were surprised to see Archbishop Benson Idahosa come to pulpit, because they thought he was still in Lagos.

However, most of them did not yet know a new pastor had been elected. Elder Ogolo had planned to break the news in the service that morning.

Archbishop Benson Idahosa began his sermon, with his rival sitting behind him, hissing and pushing, trying to make him sit-down. As he continued preaching about God’s love, the people began to weep.

The young preacher concluded by saying, “I’m not going to fight. If what God wanted to use me for is finished here, I cannot contest it.

But people, I want you to know that when I went to Lagos I was still your pastor, and before I came home a new man had been appointed. I am no more your pastor after today.”

When he started to walk off the platform the people all stood up and several of them called out, “You are our leader, you are our pastor. That man is not, “pointing to Elder Ogolo.
“We will leave the matter in God’s hands, and see what happens, “Archbishop Benson Idahosa said.

He and his wife Margaret returned home, and on Monday morning he went to his office in town as he usually did. But as the week progressed it seemed apparent that God was indeed directing the affairs of the little church on Forestry Road.

On Tuesday, the son of the man who chaired the meeting in which Archbishop Benson Idahosa had been removed as pastor died of malaria.

On Wednesday, the Elder who had removed the foundation stones from the building site lost his daughter because of illness.

On Thursday, the third protesting Elder was taken to the hospital with tuberculosis.

And on Friday, Elder Ogolo, the newly ordained pastor, was rushed to a hospital with a heart attack, then taken to Calabar for treatment.

Within days, the four troublemakers were removed. Archbishop Benson Idahosa resumed the pastoral duties of the little church.

The following week he conducted funerals for the two children who had died. He went to the hospital to pray for the elder with tuberculosis, but the man later died from the disease.

After a time Elder Ogolo recovered, but he moved away from Benin City and got a job as a bricklayer.

Yet his problems were far from over. There remained the responsibility of raising the necessary funds for moving ahead with the building project. It was a big undertaking for a small independent congregation with no financial backing. But Archbishop Benson Idahosa sensed in his spirit that he was moving in the right direction and that somehow God would make a way