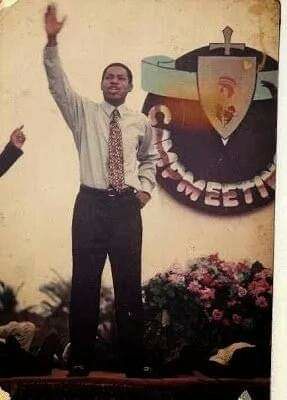 1. Pastor Chris Oyakhilome was born December 7, 1961 to the family of Elder T.E Oyakhilome who was one of the pioneers of the Assemblies of God church in Benin city and major parts of the old Mid-Westen Region of Nigeria. He is an Esam from Edo State.

2. Chris Oyakhilome conducted his first crusade at the age of nine(9)

3. On completion of his secondary Education at Edo college, Benin City. He spent his vacation as a bookstore attendant, selling book at the recknowned “Faith Miracle Centre” opposite Benin Airport pastored by Bishop Benson Idahosa of the church of God Mission Int’l Incorporated(CGMi)

5. As an undergraduate, He established a fellowship known as “Youth For Christ”. Notable among the believers was another student, Tom Amenkhienan who was the leader of choir, Anita Ebodage, Joy Ihegia were member of the choir. YCF soon became one of the largest fellowship on campus in Ekpoma.

6. By 1989, Chris Oyakhilome established the ministry known as Believers Loveworld inc(BLW) and named her church arm “Christ Embassy” with Headquarter in Lagos. He got married to Anita on February 2nd 1991.

8. By 2002, BLW had become the most prominent Christian ministry on television in not just Nigeria but all over the African continent with her Atmosphere for Miracles. Nigeria former president, Olusegun Obasanjo through the NBC in May 2004 stopped airing of Miracles on television, an action that was largely seen by Pastor Chris by targeting Christ Embassy and subsequently took the matter to court

10. Pastor Chris Oyakhilome has conducted some of the largest Christian crusade in the world till date. Port Harcourt as well as the FNS Johannesburg Crusades were said to have hosted crowds of about 2.5 million people.

11. The Rhapsody of Reality by Pastor Chris translated in 1000 languages in over 500 countries and denomination and widely considered as the most popular devotional in the world. He has authored over 21 books.

12. More than any ministry, Christ Embassy has touched the music scene of Christianity today producing gospel music ministers such as Sinach, Joe Praize, Samsung, Frank Edward, Eben among many others.