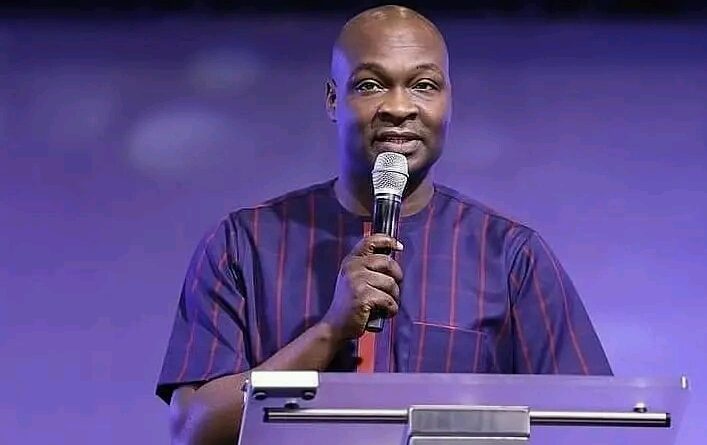 In 2007, I had a vision…I began to press into the things of God and had encounters with Jesus (and very great encounters). The Lord had began to show me the visions of the revival that was coming and a lot of other things that He revealed to me and He had shown me the necessity of the Holy Spirit, the necessity of the Anointing. He made me respect the anointing, He made respect Light and Revelation…

I was in that vision, and then I went somewhere and Bishop Oyedepo was sitting down. While he was sitting down, I came with a seed to honour him and then when I came, I dropped the seed and he looked at me and said that’s not everything, I should check my pocket.

I checked my pocket and then I found out that there was still some money, I dropped it, (then I think), he prayed for me (or something). All of a sudden, the personality I don’t know, he came and held my hand and said Come. And they opened a room for me, and when they opened that room, I saw all kinds of currency (naira, dollars, pounds) and in my mind, I said what is this, what is going on? The person told me to pick some, funny thing is that I was not attached to it at all. You will imagine that I will first roll on that place first, then sit down and choose what to carry. I stood there, I was surprised, I picked a little of the major currencies including naira, then I was going to step out, and then I woke up. When I woke up, I heard the audible voice of God, not a vision, not the Spirit speaking to my spirit – many people lie that they hear the audible voice of God, but God doesn’t speak audibly all the time: in a whole lifetime, You may hear Him just 3 times. But in that case, I heard the audible voice of God, just 4 words: Massive Kingdom Wealth Transfer (4 words). I said what is the meaning of this: Massive Kingdom Wealth Transfer, not you will be rich, not you be this.

You know every time God speaks, there is light that comes from His Word – it comes to your spirit first, (so your mind is unfruitful), it will take a while, staying in His presence to breakdown the implication of that mystery. Like the word of God wrote on a wall ‘Mene Mene Tekel Upharsin’ and Mene alone meant Oh King, you’ve been weighed in a balance and you’ve been found wanting (1 spiritual word). So when the light from God comes, you will think you understand and then His Spirit will begin to open you. (Pastor), it made me to begin to study the subject of Wealth and Prosperity from the kingdom perspective and that was when I knew that the church was under attack, under a serious attack. Please no matter what it is that you know or don’t know, I just want you to (you can insult me later on), but let’s pay attention and hear God deliver us.

The 1st attack on the church is a shield, a resentment for this truth. I told you that the same way you look at someone and know that you’ve symptoms of a sickness – the moment, there is resentment within you, you’re under attack.

The greatest end time weapon of satan will not be immorality. Listen carefully – the greatest weapon of satan will not even be terrorism. The greatest end time weapon, the real weapon of mass destruction will be to create a cloud, to manipulate the economy of nations. Remember, even the beast, when he shows up, he is not interested in women, he is not interested in men, he is interested in sitting in the economic helm of affair because whoever controls economy, controls the civilization of the people. Until now, our idea has just been car and house and I am okay (I have hundred thousand) but God is telling you there is a conspiracy against the church. Influence and glory are related to wealth. You cannot talk about influence, there are certain dimensions of the corridors of power, you cannot get there until you are empowered enough.

The Bible tells us in the Book of Ecclesiastes, a very strange parable, that there was in the city a poor wise man and the Bible said that man through his wisdom, gave a counsel that over ran the enemy, but the Bible said ‘yet the poor man’, it didn’t talk of wisdom again, wisdom has finished its usefulness, – now prosperity to continue was not there. And it said that poor man’s wisdom was despised. The teacher was looking and he said I have seen his wisdom is good but a poor man’s wisdom and if that man is the church, the poor churches wisdom will also be despised. The greatest attack on the disciples of Jesus came in the area of finance. They didn’t catch Judas one day with one woman like Bathsheba (and all of that), and Jesus say what are you doing? Judas didn’t have time for all of that but money. When he (Judas) saw the ministry blossoming, he said I can make money out of Jesus, he was not a bad man, he was just somebody who wanted to cash in fast – he was hoping when he sells Jesus, He will now unleash His power on the foolish people, and let Him rubbish them as a lesson and then he was surprised that Jesus gave Himself. That is why he didn’t even use the money again.

The subject of poverty and lack will be useless if it has no effect on Kingdom advance. Remember that we are kingdom people and everything we look at, it is with respect to the kingdom. Whatever can interrupt God’s agenda is worth your attention. Jesus was hanging on that cross as the world (Pastor), every man of God and Prophet could no longer help, their ministry finished until a wealthy man called Joseph of Arimathea, went to Herod and used his influence – he also had the tomb.. The prophet prophesied that Jesus must be kept in a virgin tomb but a poor man cannot buy a tomb. I want to show you how wealth played, every prophet stopped in the temple, it took wealth to continue to resurrection. The Bible says Joseph of Arimathea went and met Herod and demanded the body – Influence through wealth, not prayer. And then the Bible says he (Herod) gave the body of Jesus and an opportunity was given for resurrection to happen – it was a virgin tomb.

Prophet Uebert Angel– We Are Tired Of Motivation Speaker

H.E Ambassador Uebert Angel Speaks On The Manifestation Of His Son Uebert Angel Jnr Who Is Also Known As Seer1